I'm getting a little frustrated with the E12. Spending more time working on it than driving it is getting old.

As soon as I got the cooling system put back together there were several new fuel leaks. I cured all but one by tightening the clamps where the fuel rail connects to each short injector hose. One injector was leaking where the short hose connects to the injector. After researching these injectors and how easy they are to damage when removing the hose, I just replaced the leaking injector with a rebuilt one from FCP.

Well, after driving the car TWICE, now another injector is leaking in the same place. Ugh! The P.O. replaced all the fuel lines and had the injectors cleaned/flow tested in 2015 and the car ran better before I replaced the one injector, so I don't want to just keep replacing injectors.

I know the barbs on the injector are supposed to be enough to seal the hose to the injector, but has anyone had any luck adding a fuel injector hose clamp to stop this type of leak? Alternately, I'm not sure if the P.O. used genuine BMW fuel injector hose, so I may just try to replace the short hose on the leaking injector this time. Any suggestions for removing the existing hose without damaging the barbs?

You're lucky it's leaking there and not at the body itself, I've run into many of those.

But yes, you can emphatically put a hose clamp on it. The fuel line today, even BMW line, isn't what it was way back then. I'm not sure it was any better or longer lasting, but the old stuff was incredibly tough. Removing it is a bit of an ordeal, I use an Exacto knife, not a utility knife, to slowly cut it away. But just throw a clamp on there. While I haven't always had such high standards, I'd use the type of clamp that surrounds it all with relative even pressure, like the ones in the link. The regular worm drive ones will work, usually, and probably in your case since I doubt the hose is all that old and stiff.

I've used Mr. Injector several times and am always pleased with the results. For $17.50 per injector, they're ultrasonically cleaned and the service includes a before and after flow chart, new correct hoses, stainless steel clamps and the rubber seals (no affiliation). If you go this route, be sure to measure and trim the hose before installing the fuel rail as they're almost impossible to remove from the barbed fitting. The rail will hit the intake manifold if the hoses are too long.
78 F150
79 528i
81 528i parts car
01 540i
86 944
08 X3 don’t judge me it’s there to preserve the others
Top

Thanks for the replies and great info!

Oh good. Learning I can anticipate further vintage parts NLA, now junk hoses. Whenever it was I had a local parts finisher zinc plate collected hardware and a few larger pieces. Fuel rail. I copied the assembly from the other: The fuel lines use little cups on each end to compress the line around the barbs on the fitting. No clamps intended. The finished piece looks as new.
Now the anticipated fun part, the rail will be buried in the required order of assembly before the engine is started. You know, to observe the fuel squirting, fire hazard,... faulty injectors. Lunacy.
Top

Mine had clamps - I assumed they were required to seal. Got a reman deal through rockauto and replaced them all - no leaks.

However never never cut with a knife vertically in line with the barb as the fuel will use that as a channel and leak. When I took the old injectors off someone had done just that, so I carefully sanded down each barb smooth. I've had no leaks at all since. 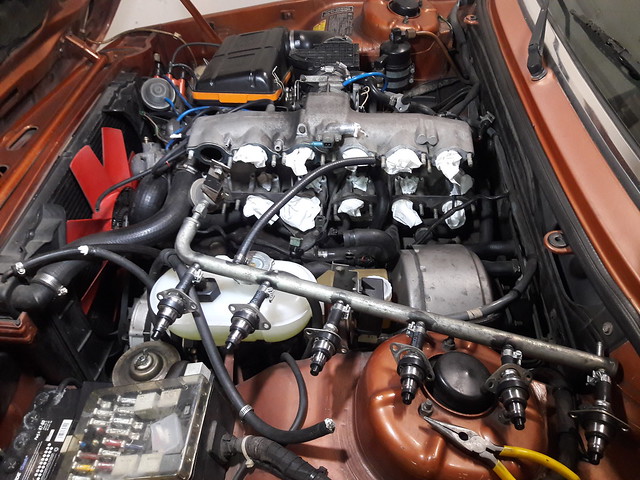 I redid my fuel rail with new hose hose and clamps. Works great, hasnt leaked a drop. Seems weird to me that BMW didn't use clamps but just hose and little cups but that hose was tough as hell to remove.
1977 530i another project
1979 635csi Euro "project"
1987 635csi
Top

Thanks again for all the helpful responses. Finally got everything put back together last night with the extra clamp on the leaking injector hose. Ran the car for approx 5-8 minutes - no leak!