Hey guys, my car has developed a bad stall under load. It will have power for a moment, then cuts out for a second, then power for a moment and so on, but only under mild to heavy load. It's not engine speed dependent. It's like anything beyond 1/4 gas pedal will cause it. Currently it's undrivable, getting up to speed on the freeway is nearly impossible. Have swapped some parts and checked wiring and everything, but all looks in order.

Revving without load is ok, engine will rev up to ~6000 then level out at an unsteady 4000rpm with foot flat on the gas.

Are you sure battery connections are all good?

Had similar symptoms with water in the gas. Drove me nuts because everything else looked to be in order.
(oo=00=oo) Eric
1981 528i Manual
Top

I actually had something very similar long ago on an 80 E24. Over half pedal and it would cut out. Turned out to be a broken wire going to the FI temp sensor up by the stat. Pull on the wires a bit to test. My break was hidden by the boot, but eventually I found it. It was the torquing action of the engine that would make or break the connection. Probably not your problem, but worth a check.
Mike W.

Battery connections are good, I replaced the battery recently but can clean the terminals just to make sure. I know L-Jetronic is sensitive to power and grounds.

Also just replaced both the fuel filter and fuel pump a few weeks ago as I thought it was a fuel issue, but no change (getting noticeably worse actually).

It's almost like the engine is hitting a rev limiter, it's so on/off that I don't think it's a mechanical analog problem. I noticed when in the garage and foot flat on the gas and it drops down to 4000rpm, the fuel pressure gauge I have installed drops to near zero and then back up as the engine fires again. Our cars don't control the fuel pump though, just a simple relay with the AFM flap, but I will bypass everything and link the fuel pump direct to battery + to see if that's it. Maybe the fuel pump line is being bumped during certain AFM flap travel?

So either the fuel pump is cutting out by chance when the engine is under load, or the ECU is opening the injectors fully (explains the low pressure) but the engine isn't firing. The ignition isn't 'smart', just vacuum/centrifugal advance.

I'll do some diagnostics and see what the various components are doing. Hooking up some 12v bulbs to the coil, fuel pump and such will let me know what is getting power and what isn't.

I will check the temp sensor too - mine is down under the manifold I think (integrated with the mechanical idle control valve). My engine does physically move on the mounts so I did wonder if it was just a wire disconnecting when the engine twists. My joints have no corrosion but a lot of the insulation is brittle.
1979 528i 5-speed conversion G260/6, Motronic 1.3 179
1980 Honda CX-500
Top

Maybe try disconnecting the idle switch on the throttle if you haven't already. If the switch is closed at high RPM the ECU would think you're in coast-down and cut the fuel. Peter's L-Jet FAQ says this feature was added in 79.
(oo=00=oo) Eric
1981 528i Manual
Top

Yes I thought it could be the throttle switches too, so I disconnected them - no change. I disconnected all the sensors in the engine bay in fact barring the AFM, no change, still cuts out on and off under load.

I suspected the AFM so I took that apart as well - found very worn tracks so after looking up NLA or expensive parts, I cheated - I moved the circuit board up slightly, so the wiper was on fresh track. 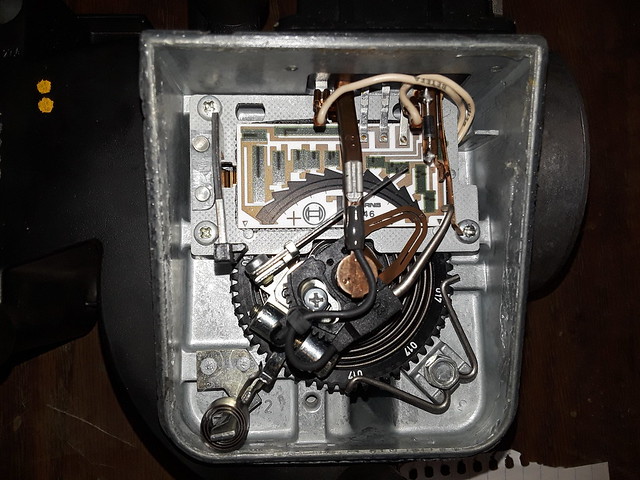 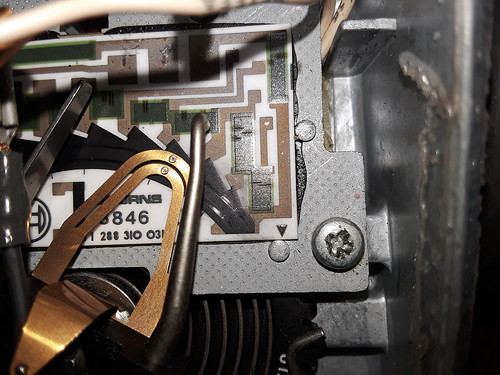 But even after that with nothing plugged in except the AFM it's doing it - I still haven't proven the AFM is okay, it may have some other invisible fault but I don't have a spare and replacements are pricey for just a hunch.

I'm going to connect indicator lights to the injectors, fuel pump and coil + lines to see if one of them is losing power which will narrow it down. I'll do that this weekend, and I suspect as Mike said maybe it's some old wiring breaking the link as the engine moves.

I noticed when in the garage and foot flat on the gas and it drops down to 4000rpm, the fuel pressure gauge I have installed drops to near zero and then back up as the engine fires again. Our cars don't control the fuel pump though, just a simple relay with the AFM flap,

Now I can't say why it's happening, but fuel pressure should remain relatively constant. That sure looks like your problem from here. I'd do a temp hotwire (emphatically temporary) on the fuel pump so you can determine if it's a switching problem or a pump problem. If anything fuel pressure should increase some as manifold vacuum goes down, but you might not be able to tell in the driveway.
Mike W.

So I'm still investigating, but so far I have wired the fuel pump directly (fused) and it still cut out. The tach needle doesn't drop, which means the distributor is still giving a signal and the ECU and coil is receiving that signal. As it happens under load open-loop it's as if the fuel map has holes, but as we don't have a 'map' maybe one of the sensors is way out of spec causing the whole system to freeze.

I've ordered a set of 12v LEDs and I'm going to wire up various parts to watch what is losing power.

I've also got a second old broken control relay (injector+fuel pump relay unit) which I'm going to solder the contacts closed, and also hook lights up to its lines internally. See what it does and if I can learn anything more.
1979 528i 5-speed conversion G260/6, Motronic 1.3 179
1980 Honda CX-500
Top

Finally got around to continuing testing. I bought and installed a new engine temp sensor because those are cheap and removed/soldered the crimp connector someone put in place, but no change.
I hooked a strobe light up to cyl 6 and with the hood popped (useful having a rear-facing hood), pulled the strobe light through the drivers window and went for a drive. When the engine cut out under load, the strobe light was still flashing, okay the ignition is good.
I then connected a 12v LED to injector #6 and placed it under the windscreen wiper and went for a drive again (it is interesting to watch, I might leave it in place for diagnostics).
Anyway that also kept blinking, indicating the injector was pulsing, along with the strobe light, when the engine clearly cut out. Nether missed a beat when the engine died. Makes no sense.
What I guess is the amplifiers/transistors for the injectors in the ECU are failing. When the duty cycle is increased (as when under load), they can't maintain the current. So the LED lights up but maybe the injectors aren't actually opening.
That or the 'load'/open loop portion of the computer is faulty. That both the spark plugs and injectors are firing but the engine completely dies for a few seconds is mystifying.
Anyway I found a L-jet ECU on eBay, have ordered, and will see if that fixes it because all the diagnostics say everything is working...
Last edited by Lock on Sun Jun 30, 2019 3:12 pm, edited 2 times in total.
1979 528i 5-speed conversion G260/6, Motronic 1.3 179
1980 Honda CX-500
Top