by HB528i
I successfully replaced my ignition switch and it wasn’t pretty. When removing it it all fell apart, no worries, I had a new one. I dremeled out all of the webbing in the upper housing and got it in, grub screw back in too.

Now I can’t fit the tumbler back into the lock cylinder. If it goes in it is in the first position and I can’t turn CCW to remove the key. The blue book doesn’t explain how to put it back in. I have tried multiple key positions as well. Anyone done this that explain what I’m doing wrong? Thank you.

by HB528i
Well, you don’t have to drill or chisel the safety bolts, the lock housing is part of the upper cover anyway. When I got the electrical switch out I broke it. So I dremeled out all of the webbing in the upper cover to get a new one in. Then I had trouble getting the tumbler into the housing. After several hours I figured it out.

The key needs to be in the accessory position, as does the switch which I turned with a screwdriver. Then when inserting the rod/cam assembly the cam on the rod needs to be in the accessory position because it slides behind the pin in the lower right of the housing. That was the break through. Align tabs in the rod with the switch, push the rod in and then turn slightly CCW until the cam fits behind that little vertical pin. Then insert tumbler jiggling key to align with the rod/cam.

by Lock
Good timing, I was also replacing the ignition switch on mine last weekend. I found a few guides, and successfully removed the old ignition switch (cutting the wires and breaking it on the way out in the process).

When I tried to get it back in, it also got stuck on the webbing which I considered dremeling, but there must be another way. I tried to 'gently' force it past but it absolutely would not go in, and it's fragile.

I figured the steering column would need to come out at this point, but it's easy just three bolts and loosen the steering shaft and unplug the cables. I then removed the holding cylinder and then the lock cylinder itself. There are three 'cylinders' here - the steering assembly cast hole, the middle 'pipe' cylinder which holds the lock, steering lock and ignition switch, and inside that the actual replaceable keylock cylinder itself. I figure the reason they sell the ignition switches without the plastic plug on the end is because you assemble the lock unit (keylock in one end, ignition switch on the other, connector shaft and steering lock mechanism in the middle) outside of the car, then feed the wires through the cast steering column cylinder hole and feed that cylinder back in. The plug doesn't fit, so you clip the leads into it once it's in place. For me, this job was so much easier with that middle cylinder out of the car - how the factory assembled them, I'm guessing.

I was able to get rid of the PO's sketchy pushbutton starter, and also get rid of the intermittent no-crank issue. I now don't have to give instructions to people on how to start the car. 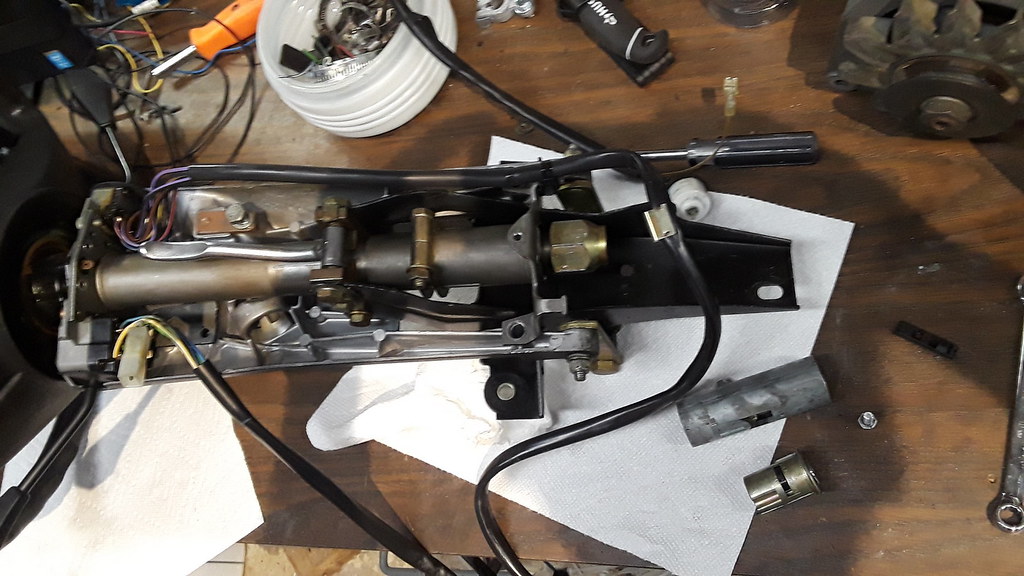 by HB528i
Removing the whole lock cylinder would have been easier but I was determined. I also dremeled gently the upper edges of the plastic ignition switch. Drilling or chiseling five safety bolts does nothing to provide more room for the ignition switch itself. Great write-up.

by Lock
Also it looks like my lock was replaced in 1988, so all the lock bolts were already replaced with normal hex heads making my job easier.

After never having a working 'start' function, I just discovered that when you release the key from 'start' back to 'on', if you turn it to 'start' again it doesn't power the starter until you rotate the key to off and back around again.

I thought it was a fault or weak contact until I realized - that's probably so once it's started, if you turn the key to start again, it won't engage the starter on a running engine. That's a really clever feature, and I've never come across that before.

Not sure if all e12s had this originally, or if it's a newer ignition switch revision.

by Lock
An update on my experience - don't buy the cheaper "OEM Genuine" white plastic ignition switches, they are not genuine and they're trash. The wiring is also cheap and thin.

My e12 already had the plastic version, and the 'start' function didn't work. What looks like happened is the original broke, PO's mechanic ordered one of these white plastic ones, that broke soon after so rather than install another one they hacked together a pushbutton start.

Unknowingly I ordered the same thing, installed it, and a month later it has also broken. ACC-ON work but start does not.

The real genuine article is an all-metal cylinder with a brown PCB base. They're more expensive ($170 vs $70) and you have to order them from Europe so it's slow, but worth doing right.
All times are UTC-05:00
Page 1 of 1
Powered by phpBB® Forum Software © phpBB Limited
https://www.phpbb.com/