Thought id post some of my updates for my swapped e12 its not running yet so dont take this as a guide by any means but it will have usefull information on swapping a e12 to motronic 1.0 with a monotonic 5 speed.
1.)Wiring using the wiring harness I got with the motor from a junked 1986 635csi you need to modify the c101 plug or plug into fuse box to work I just cut off the e12 c101 plug and the e24 c101 plug and used the "e28 wiring conversion " from the first fives FAQ. US owners have to add a circuit the FAQ was made for a euro car The yellow and green wire that goes to the e24 c101 plug has to be wired to something that is hot on start or run this is the o2 heater circuit. (recommend having a 7.5 amp inline fuse) and recommended you get the O2 sensor with the heater from the later bmw's so it idles correctly. I have not wired in that circuit because i havnt looked for a pin that is hot on start or run but im hoping pin 7 the green and purple wire on e12 c101 is hot on start and run. 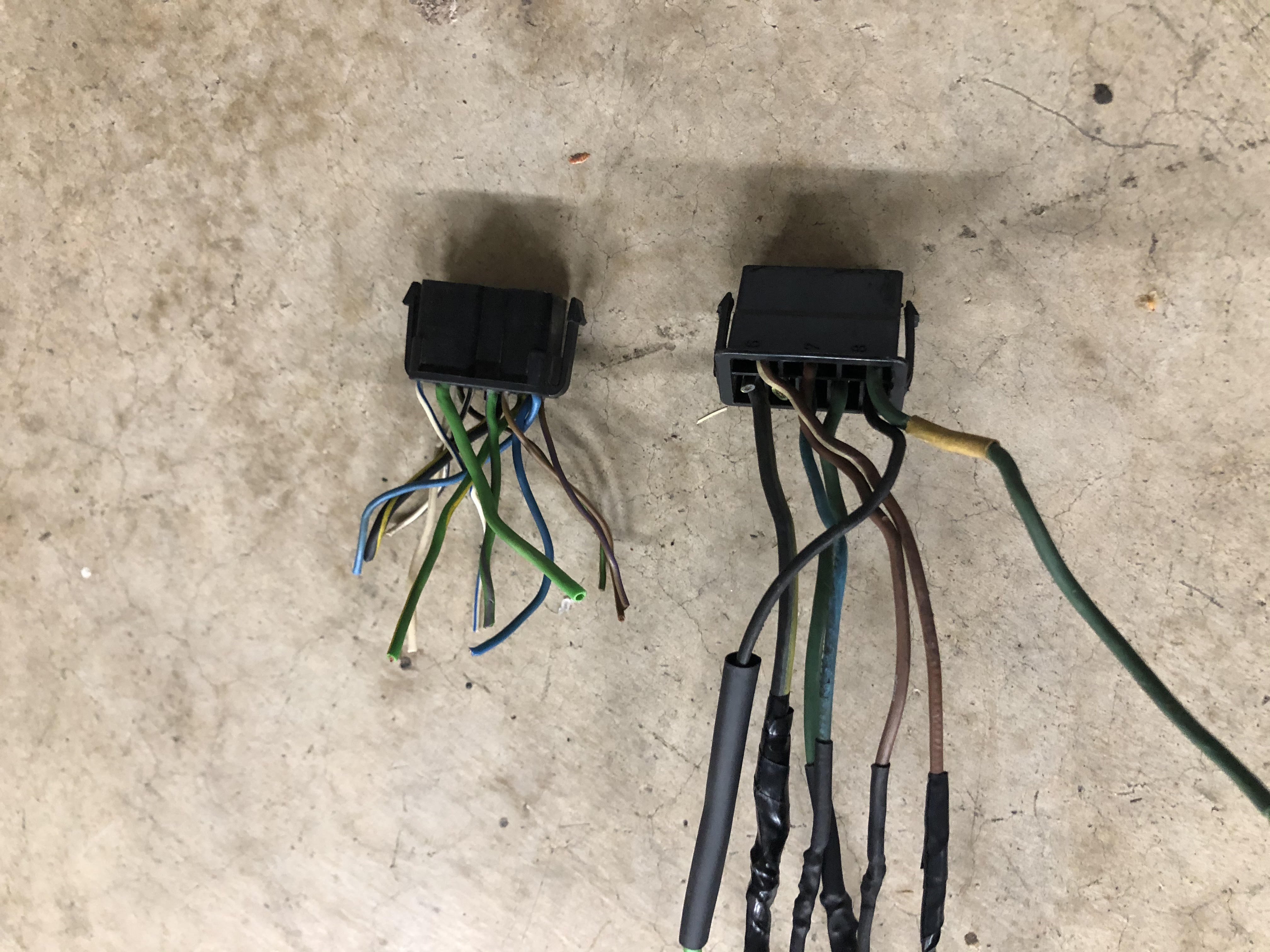 2.)Fuel I dont recommend the way I took but I will show anyways, I used the motronic fuel rail and injectors but had to buy a fuel pressure regulator adapter so i could fit the e12 intake and I even still had to grind down a little for it to fit (Not permanent) then need another adapter from soft-line to 14mm injector o-ring for the FPR. if you have the money I would recommend you buy injector top hats like the picture I will provide from someone else and use the e12 fuel rail. 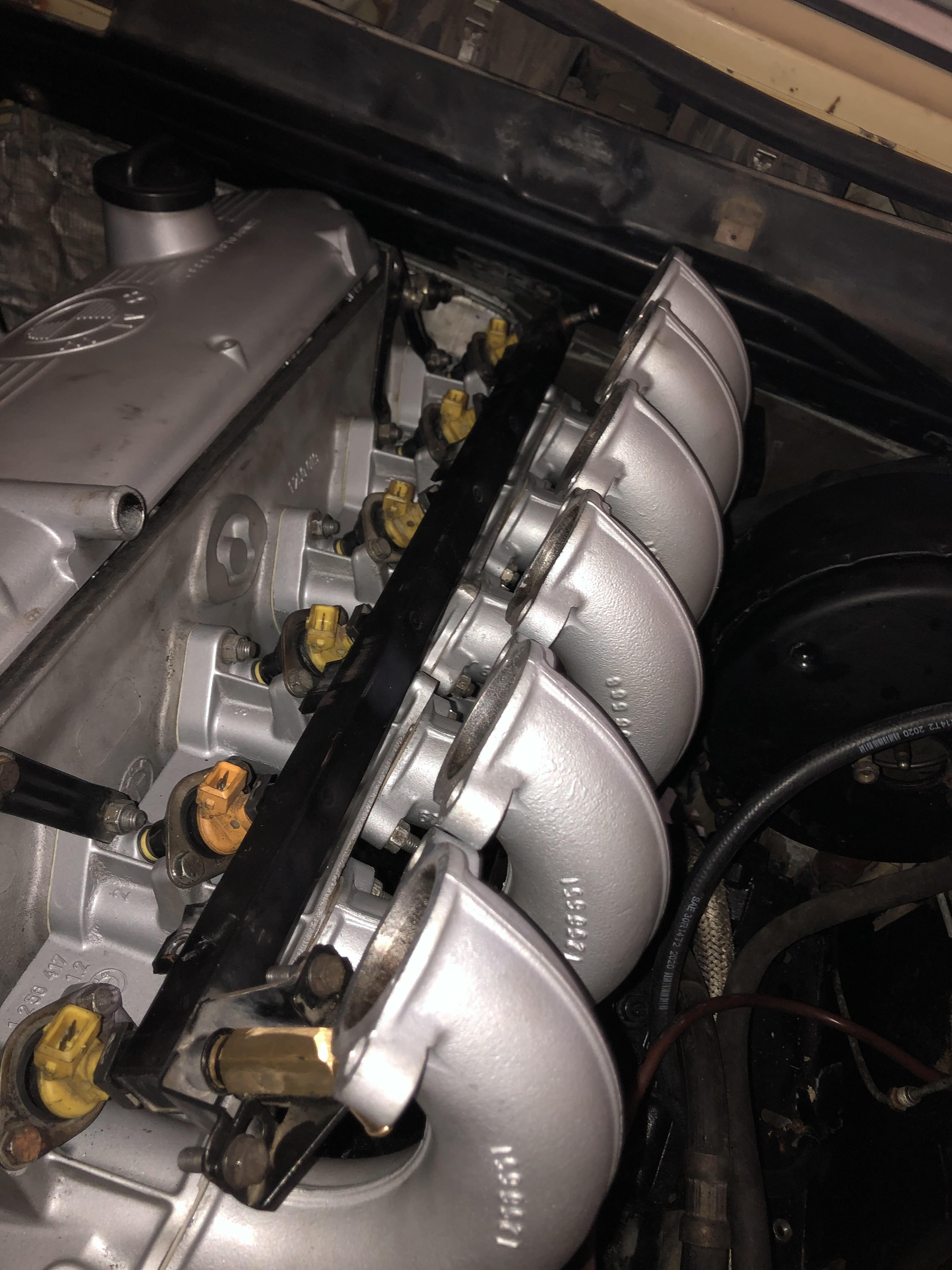 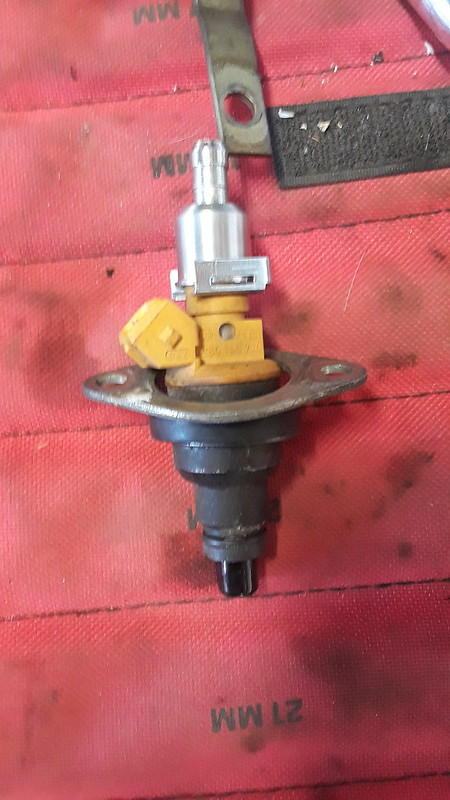 3.)Throttle body and intake stuff First off you will need the throttle pos sensor from motronic manual/auto (depending what trans you choose) it fits right where the e12 one goes with no issues make sure you hear the click when you set in in place at closed throttle. I dont know how necessary this is but e12 uses a vacuume advance system for ignition so it has a hole in the throttle flap (i will show in pictures) so i swaped it with the e24 throttle flap (not sure it thats what its called haha). There is also some extra vacuume lines and holes you need to close up. I used the hole right before the flap (side closest to AFM) for the ICV then connected it to the hole in the intake next to the cold start injector (I swapped the e24 cold start injector into e12 intake again not sure how necessary). Next i used the e24 intake boot with the hole for the egr valve thingy but shortened it since it was way too long and i didn't need the other holes. 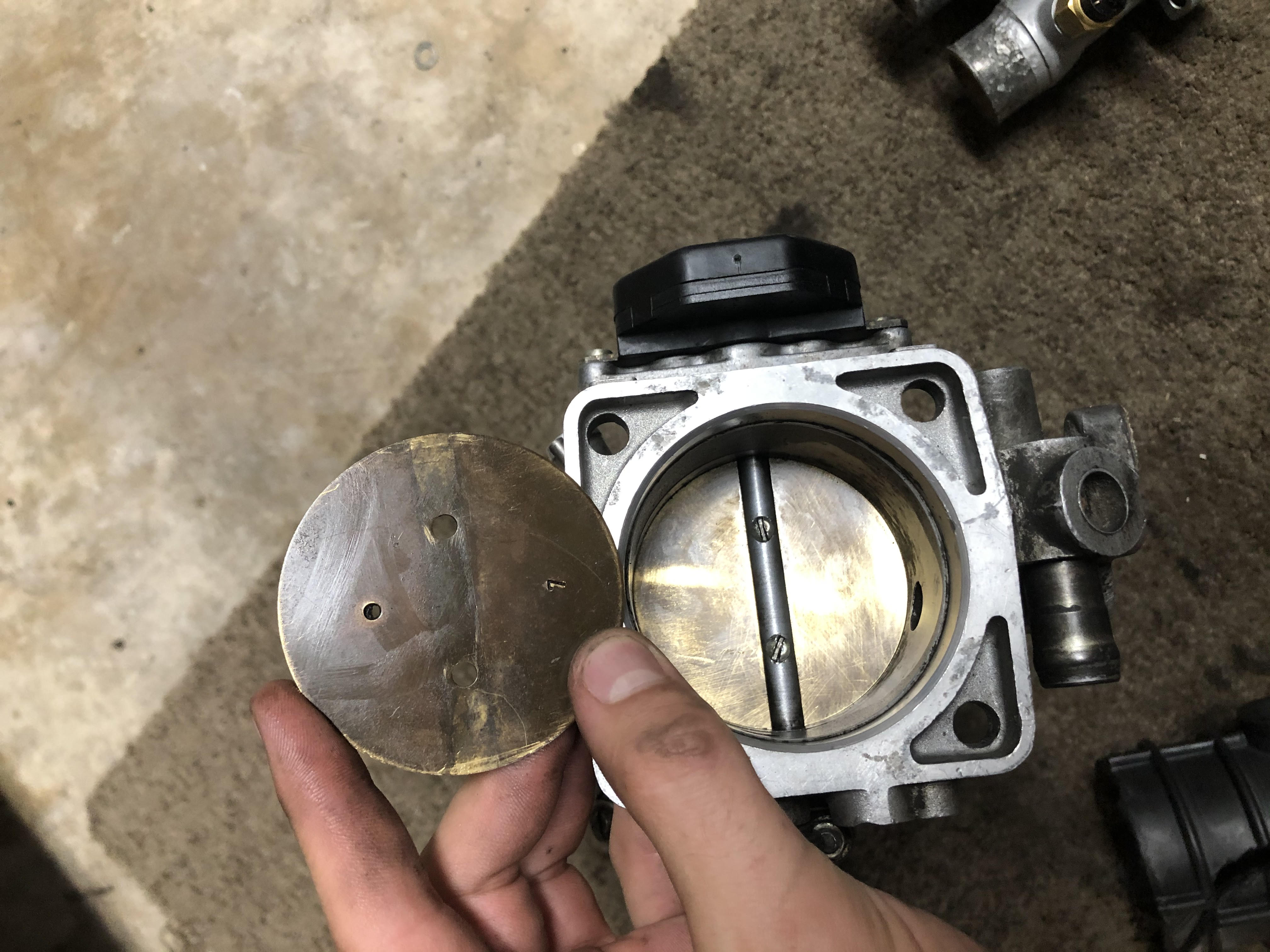 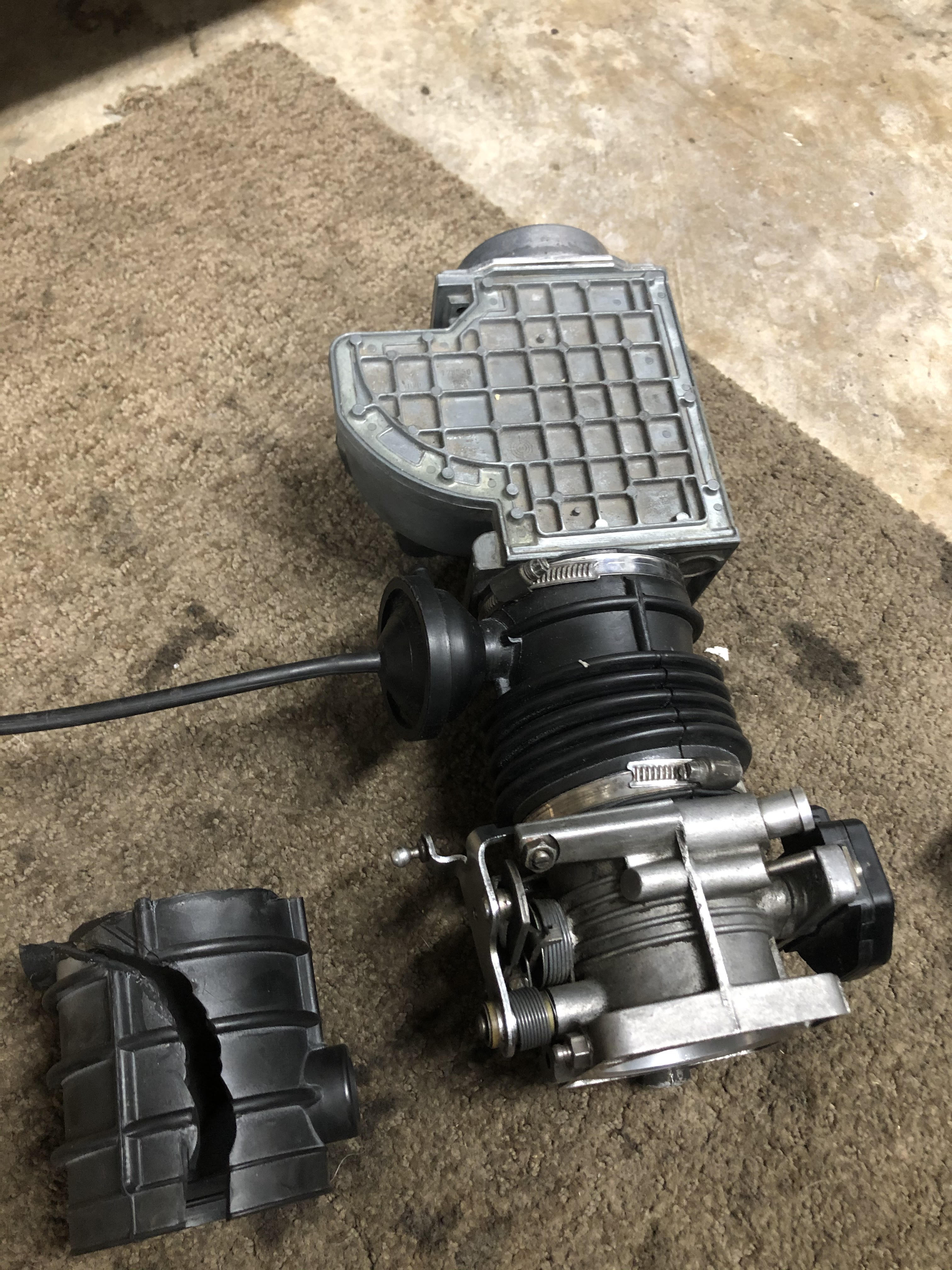 Forgot to mention I am using the e12 cylinder head because I got this motor from the junkyard and it looked like the pistons and valves were starting to get to know eachother too well, as well as I had a e12 cylinder head from my b28 rebuild sitting around. I know its not the strong one since it was casted in 78 and I also had to buy a head gasket from a early euro m90 motor that was 2.5 times the price of a m30 head gasket. The e12 vacuum advance line on the distributor I leave disconnected and leave the timing all up to the computer, well see how this works its not running yet. Heres a picture of her in her sad state right now. 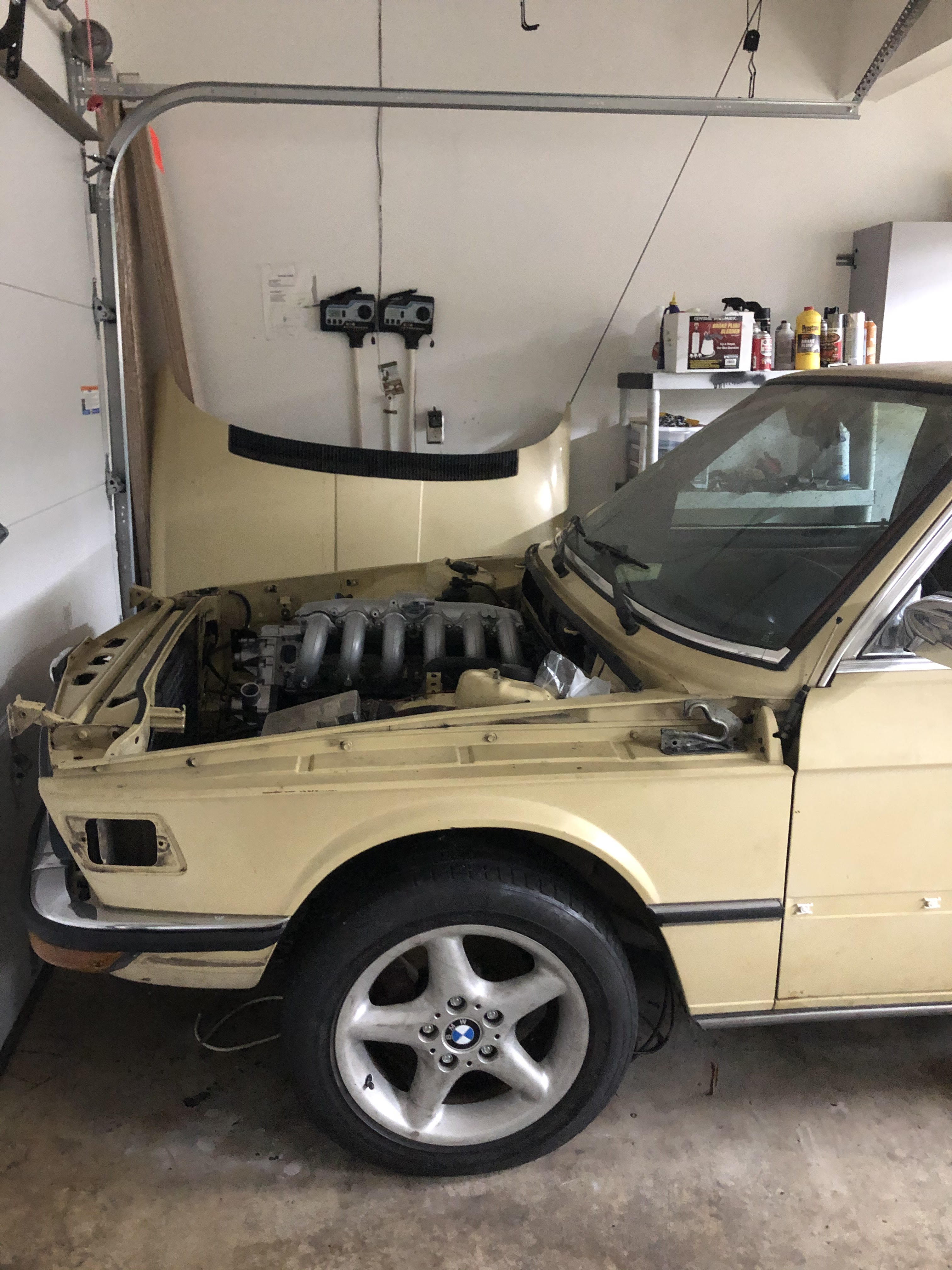 Per Lock's thread I used the wiring harness out of an 88 528e and spliced it into the c101 on the 81 528i. Pulled switched 12v from the square molex plug under the dash to c103 and the tach signal wire from the coil. I also used the later motronic fuel rail with the Bosch III injectors. Drilled out the lower manifold to accept the new injectors. Less leak points than the multiple hose option. For the FPR the same adapter was used but the FPR was changed out for one from a 6 cyl Jaguar since is has hose barbs on both sides. Mounted it to a flat stock bwacket that bolts on to the intake runners.

A lot of the vacuum lines were eliminated going to motronic 1.3. The only one left is the one connected to the FPR. What I did forget was the wire that runs to the tach but that's a detail that will be addressed once the speedo is converted to the e28 impulse type and the 4hp22 install is complete.
Top

RDAvena wrote: ↑Fri Dec 18, 2020 1:59 pm A lot of the vacuum lines were eliminated going to motronic 1.3. The only one left is the one connected to the FPR. What I did forget was the wire that runs to the tach but that's a detail that will be addressed once the speedo is converted to the e28 impulse type and the 4hp22 install is complete.

Sounds like you're at the same place I am. I need to install the e28 rear to get the speed sensor, then install the electronic e28 speedo.

Hello Lock, kind of. Not going the whole e28 rear diff/subfame route but rather a hall-effect setup on the e12 rear half shaft and then just do the four wire hookup to the e28 speedo in the cluster.
Used this video for reference: