Damn, thats a real mans garage. Congrats Mike. I'd say everyone seeing this is jealous, including myself. Looking forward to more updates.

Eleanor's officially moved into the new garage now. However, I'm currently in the process of hanging radiant barrier, which is sort of like tin foil on a roll, but it's much tougher and resistant to tear.

The problem is that, even though I'm using self-tapping screws, the project is taking WAYY too long, and is tedious. As a result, I have resorted to a cobalt drill bit to pre-drill each hole (three holes per "rib") and, once done, THEN proceed with hanging said radiant barrier.

I cannot begin work on ANY projects in that garage until I at LEAST get the basics (e.g. radiant barrier and simple hanging lights) installed. Then, it's a matter of using my Case 580c to move tools and parts from the old "garage" to the new one.

I don't even have power ran to the new garage yet. My "power" setup is a 30AMP extension cord running from an external house outlet into the garage!

That's currently powering my boom lift, which, along with the Case, have been EXCELLENT investments for our property!

Right you are about moving stuff with tractor's loader bucket - it's a Godsend. I recently picked up pallet forks for the front of my Kubota compact and a ballast box for the back (your Case probably has a backhoe for counterweight). Good luck with the barrier project, I look forward to seeing Eleanor's next update.
(oo=00=oo) Eric
1981 528i Manual
Top 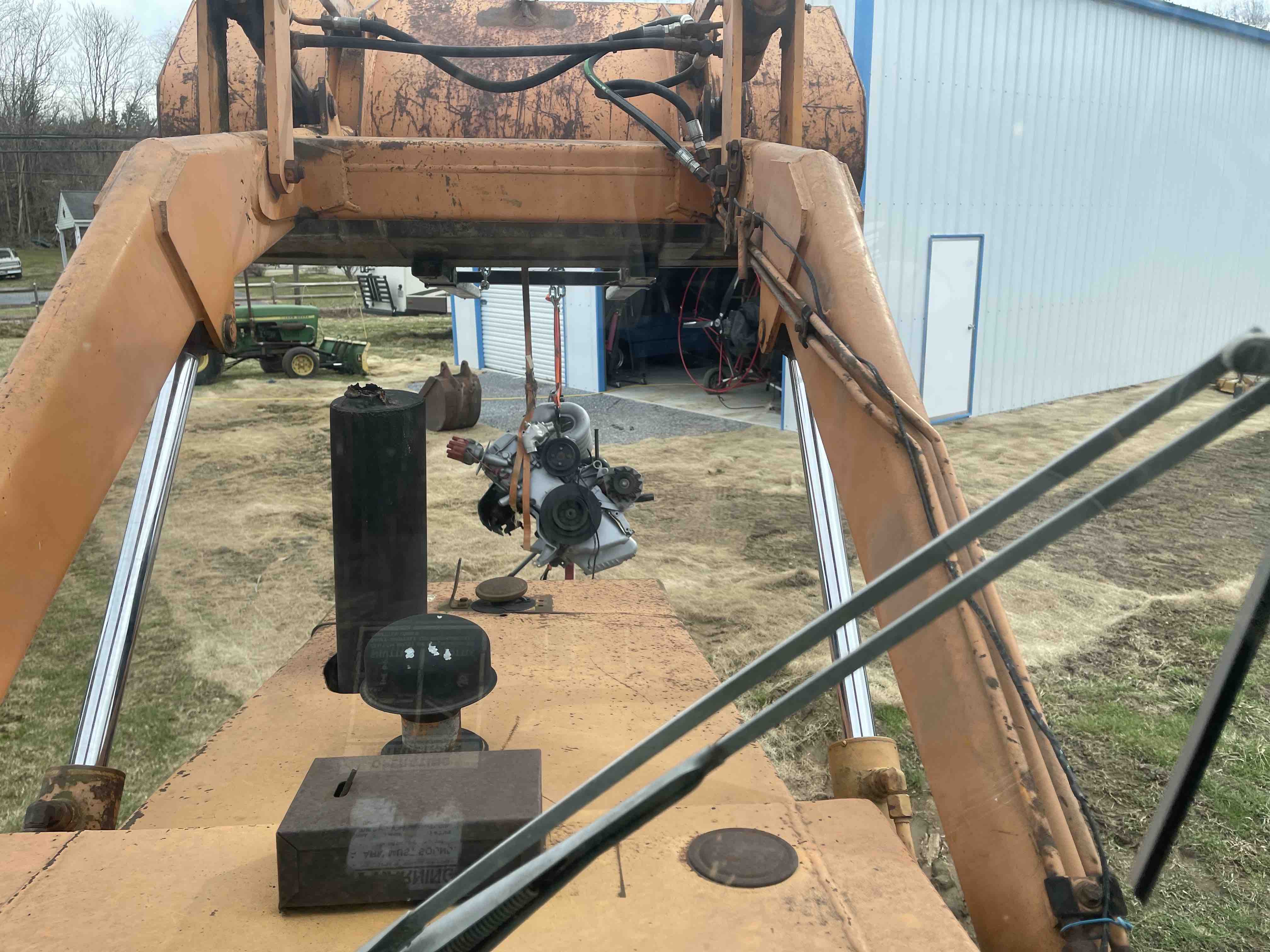 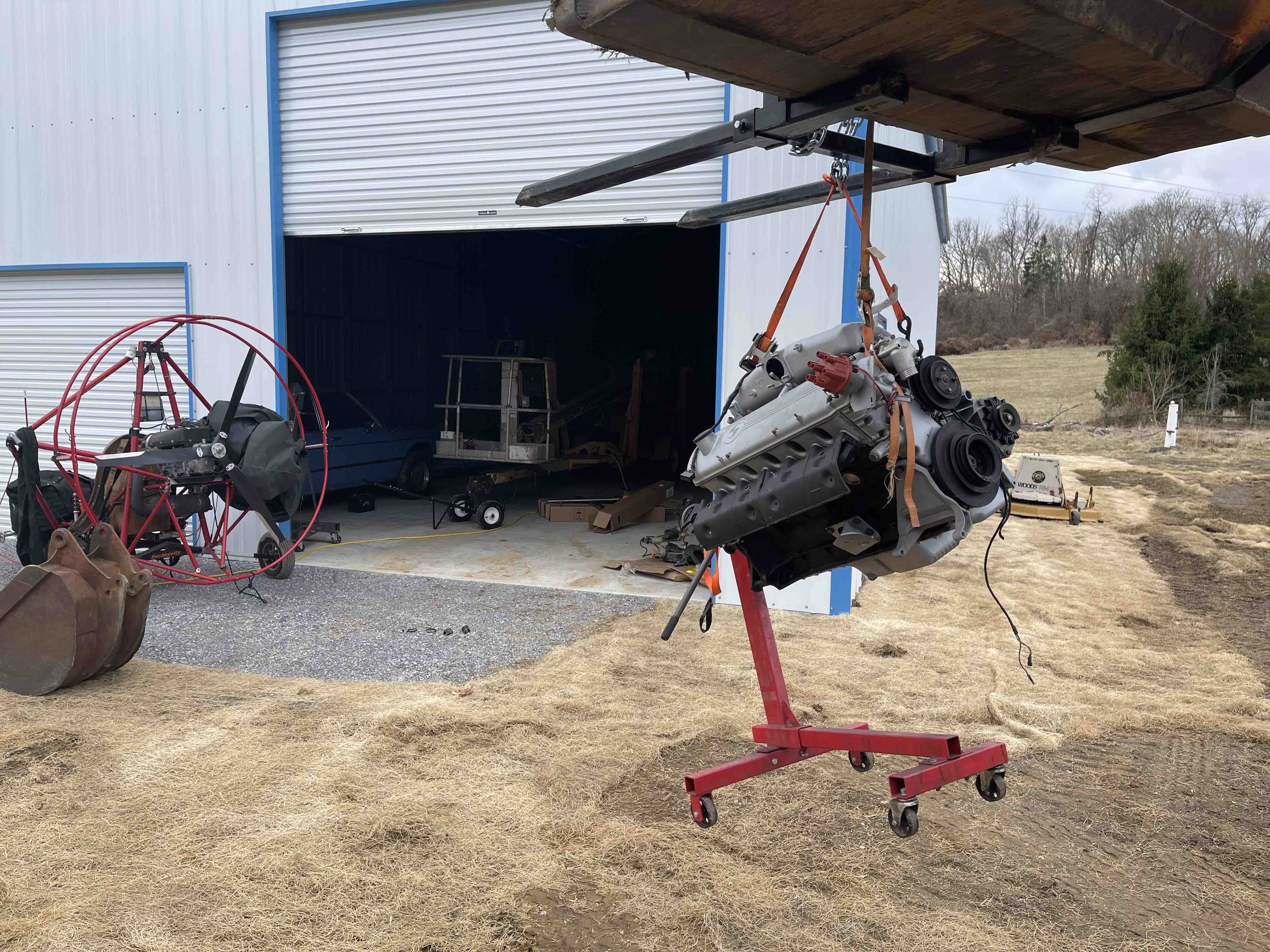 I carefully moved Eleanor's engine from our upstairs out to the new garage. 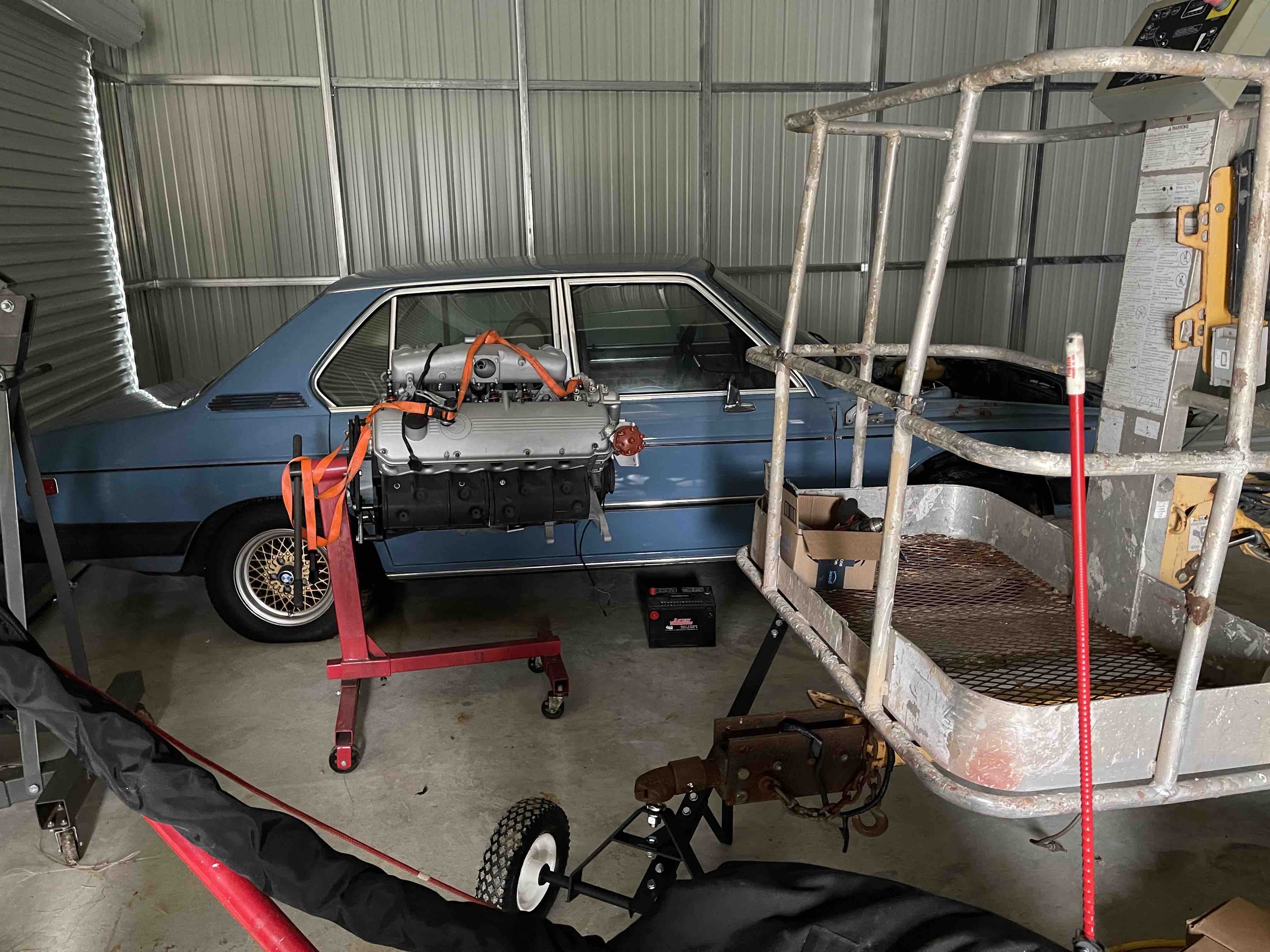 Eleanor and her engine are now reunited! ...Sort of. 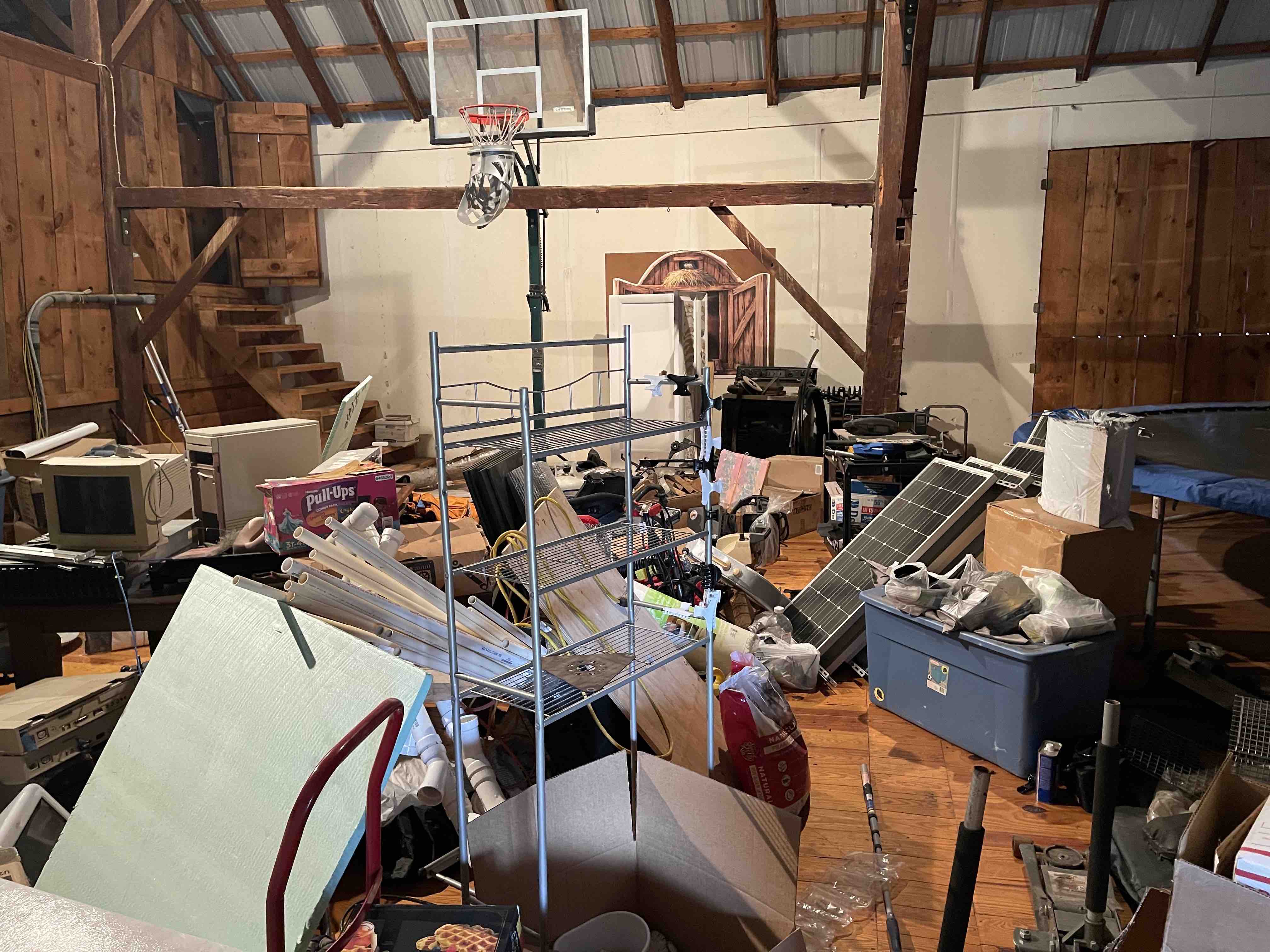 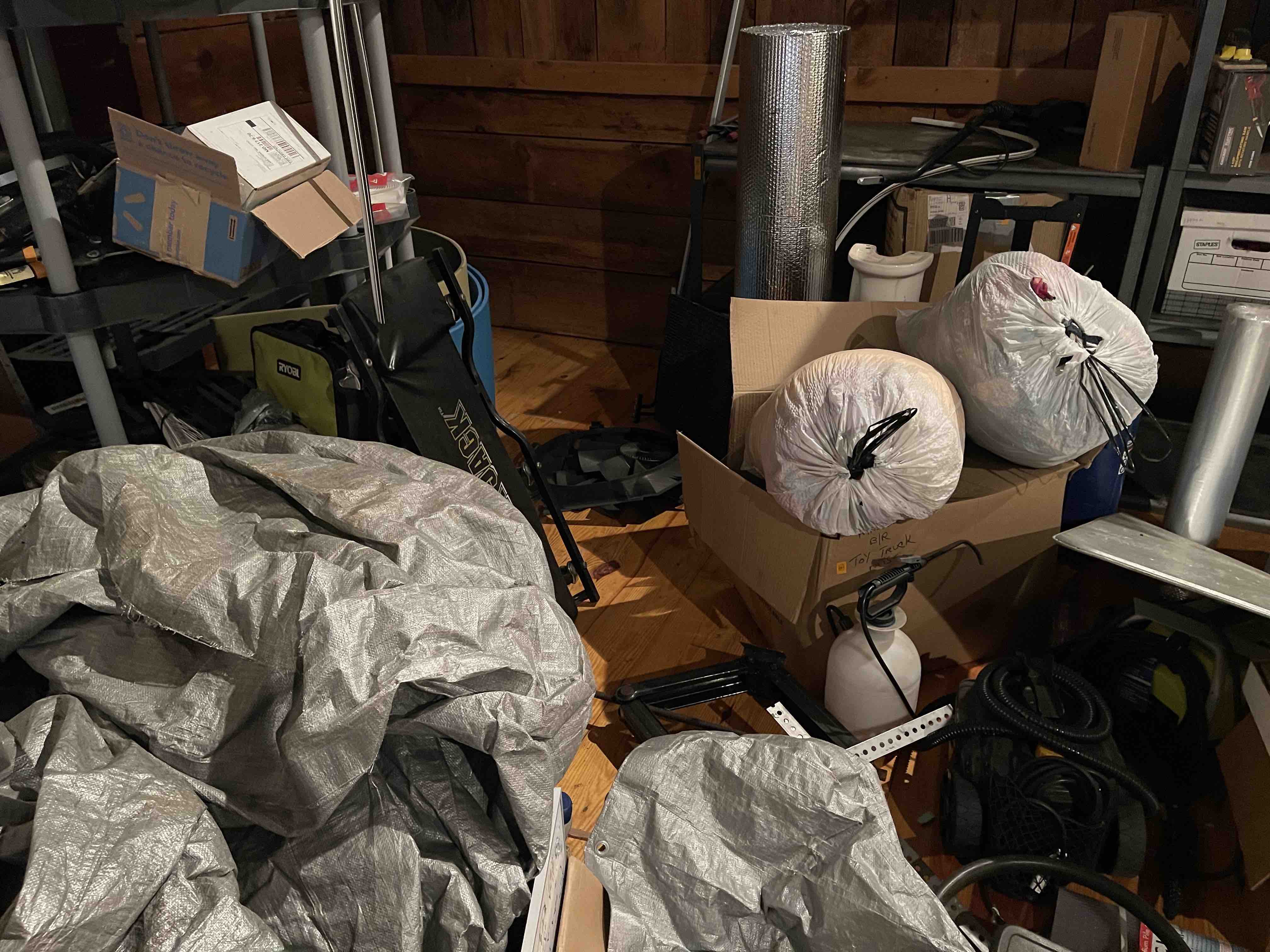 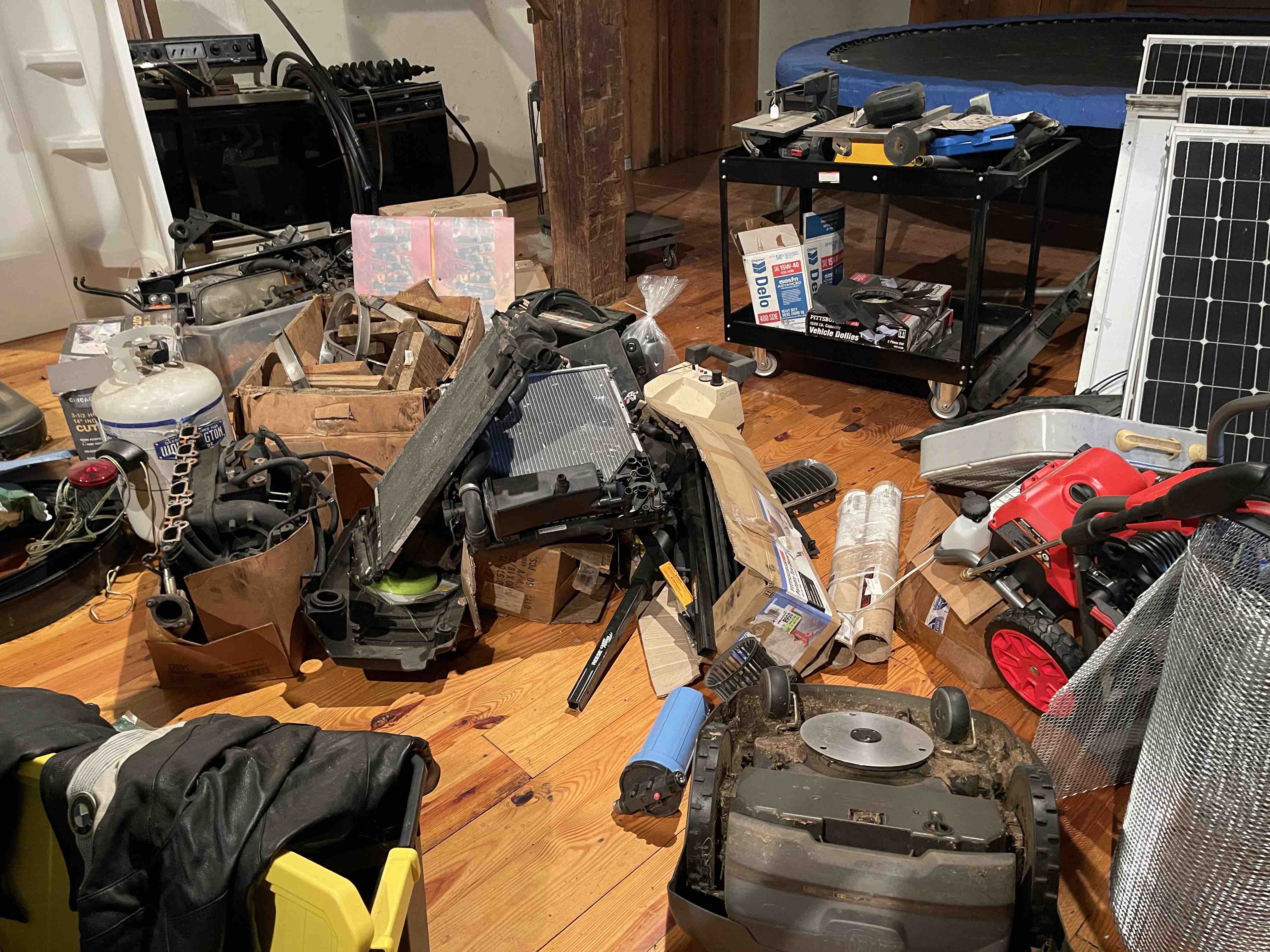 I've mentioned in past posts that when we moved from the old house, stuff was pretty much thrown wherever. Hopefully these pics give some context to what I mean...

And yes, this IS the second story to our home (which is a barn, BTW), and yes, that IS a full-sized trampoline!

I didn't include any pics of the old "garage" aka: glorified shed, which is also in equal disarray. I'll throw a pic or two up next time I post. 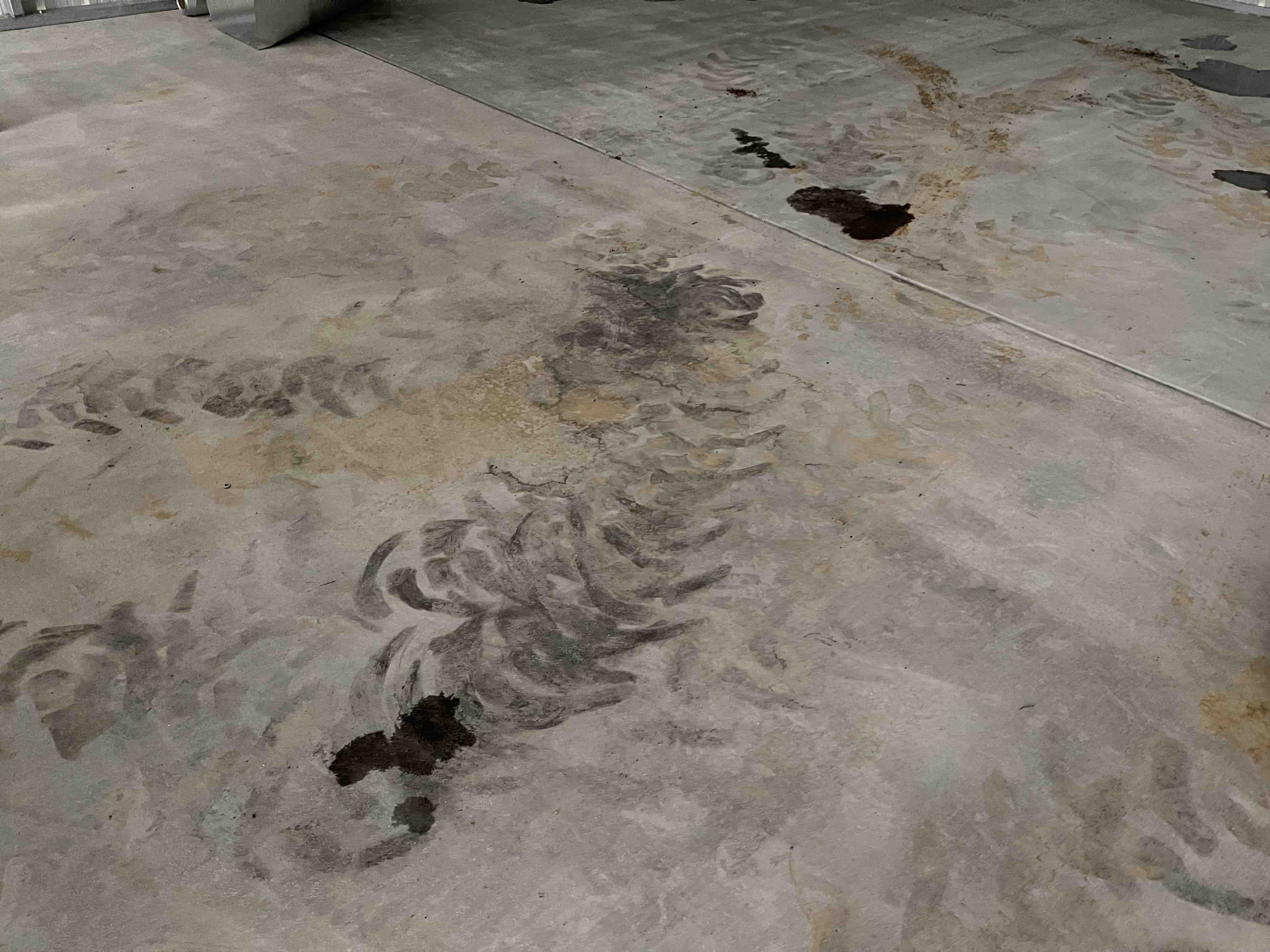 While I was busy drilling holes for the radiant barrier insulation, I was noticing that my boom lift was leaking hydraulic oil and making my new garage floor a complete mess! 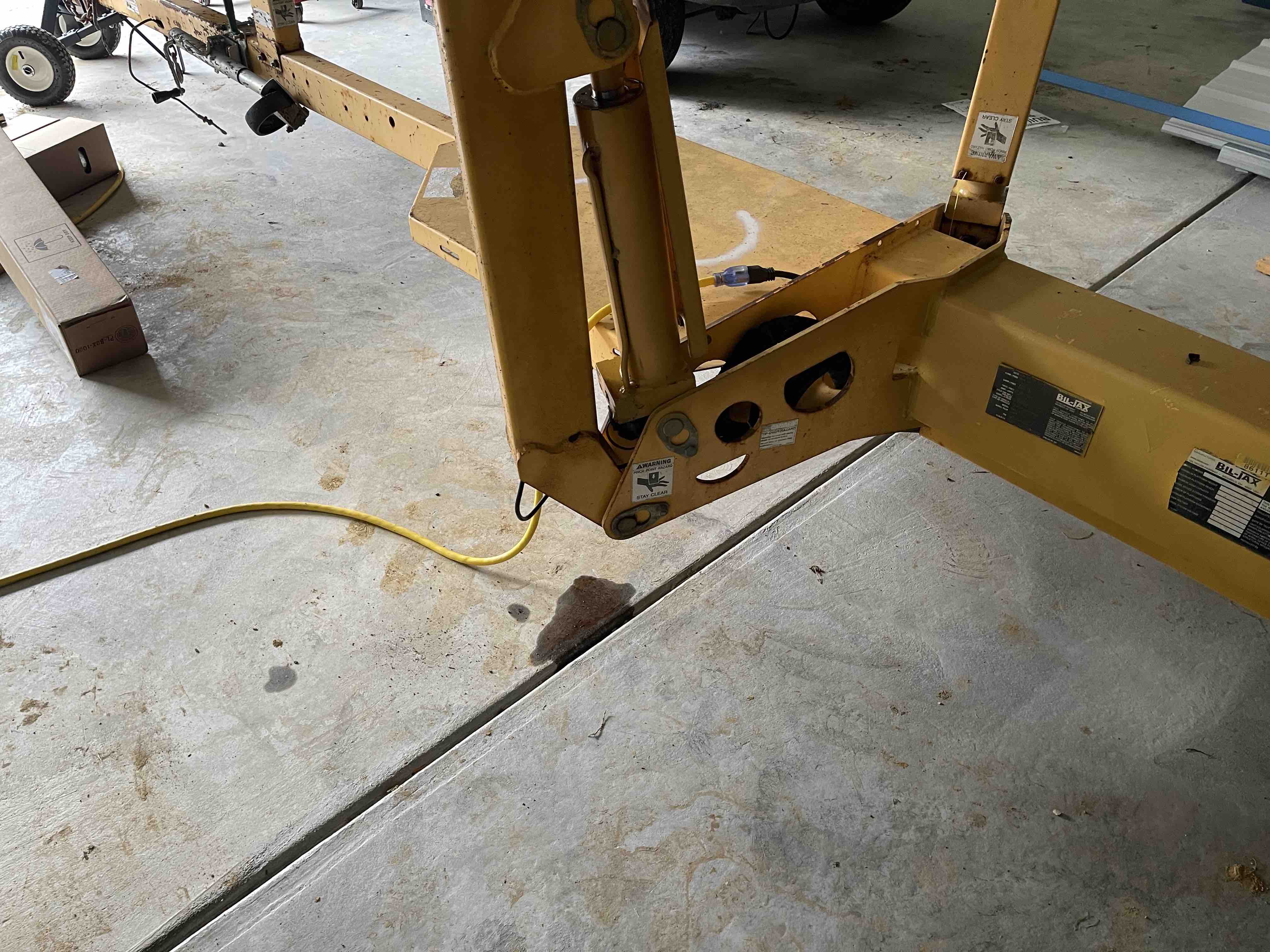 Turns out the outrigger cylinders were leaking oil. This one as well as the rear-right cylinder were dripping oil like a dripping faucet. I determined it wasn't safe to use the lift in this condition, so I attempted to dismantle the affected cylinders and replace their seals... 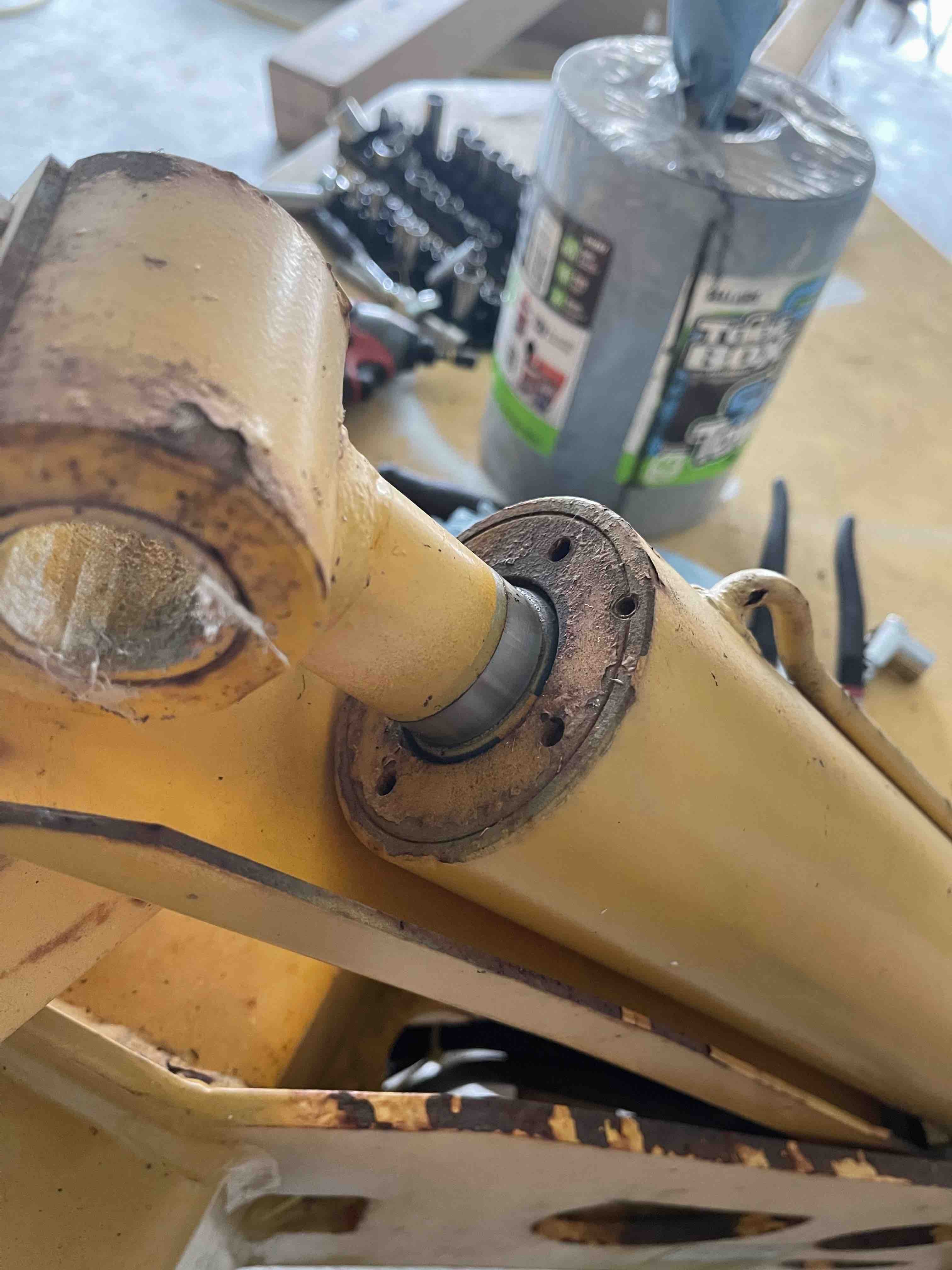 As you can see in this photo, the end cap is recessed into the cylinder itself. Haulotte (the manufacturer) has ZERO information on how to remove these, but I noticed that the holes closer to the center were angled. Meaning that it's likely one could take a punch and hammer to inch the end cap on and off.

This technique did NOT work for me! To add insult to injury, the hex grub screw was also froze solid in place. No amount of Aerokroil could budge it, and I wanted to be very light on the propane torch, as the internal gaskets could turn to goo. So I decided to go for the nuclear option... 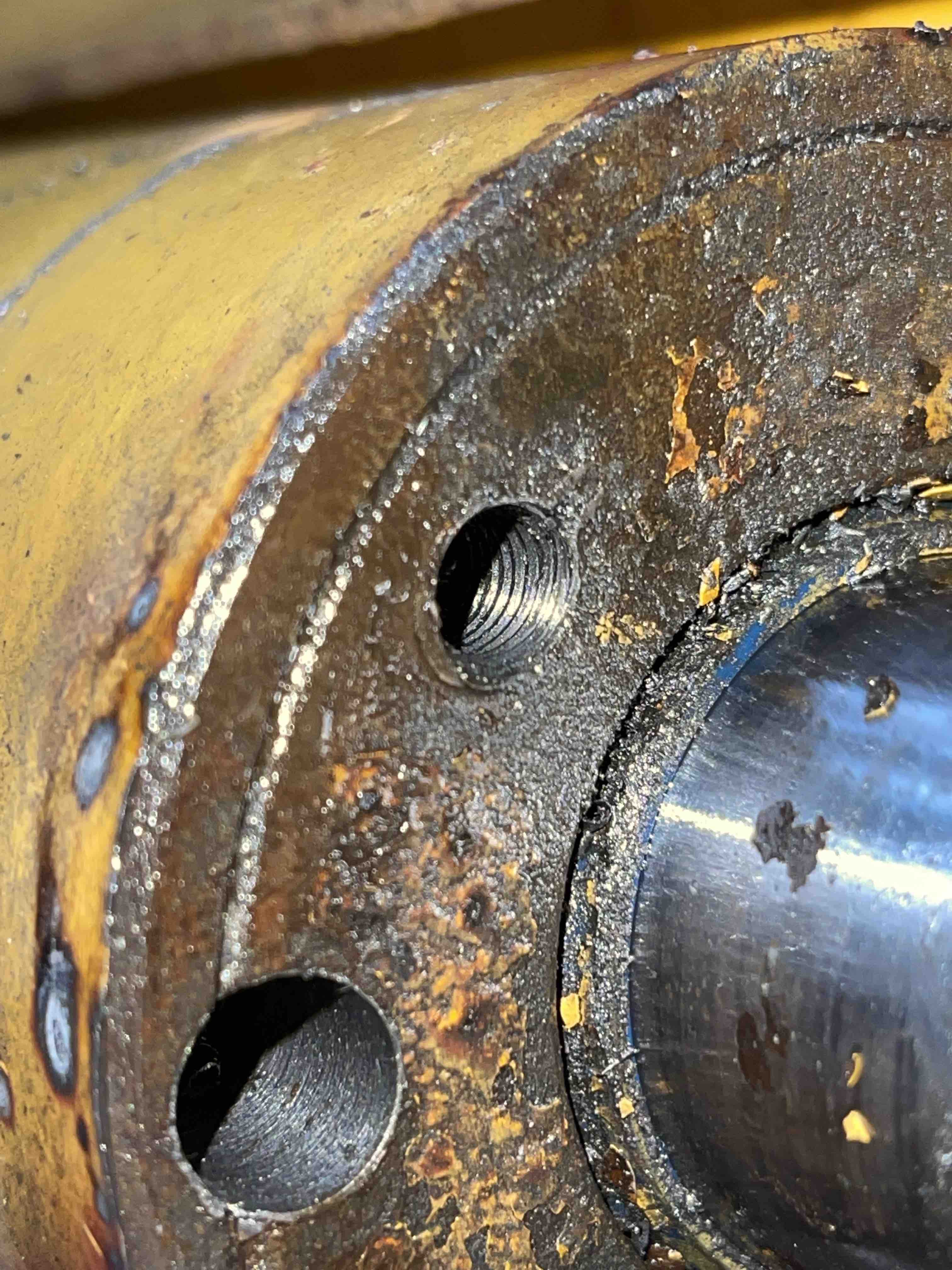 ...Which involved my drilling out the grub screw AND drilling/tapping the four holes to fit a bolt. I also fashioned a rudimentary "wrench" that allowed me to fasten all four bolt holes to said wrench. Even with an 8' cheater bar, the damn thing didn't budge a millimeter!

Which, this failure to remove the end caps resulted in me reaching deep into my pocket book and ordering two ~ $1,700.00 hydraulic cylinders

What's most annoying is that I could not find new or used outrigger cylinders at a decent price ANYWHERE online (even eBay)!! I had to create a Haulotte catalog account just so I could order the cylinders direct from them...at MSRP

The story about the war being lost over a horseshoe nail is rather apt here. I can't start any work on Eleanor until I get the barrier hung up, but I can't do that until I get the cylinders replaced...

....All that being said, there will be more to follow...
Top

My experience with things hydraulic, mostly fork lifts, is that they always leak. At least a little. I remember I had to work on forklifts a bit long ago and one came in for a leak with no description of where. So I played with this and that and found a leak and fixed it. Wrong one. It was under certain conditions it leaked a lot, but under very specific conditions, and only then. Grrrr.
Mike W.

Agreed. My Case 580c leaks a bit of hydraulic fluid, but that's because the seals and hoses are worn. That is another project I intend to tackle this year (making new hydraulic lines).

Update: The boom lift IS fixed (FINALLY!!!) and I've drilled all the holes in the garage steel, ready to receive the screws that will hold up each sheet of radiant barrier. That will happen this weekend. Plus, the local hornets have already begun their "exploration" of my garage, so I need to get the barrier up ASAP, as it will physically isolate a couple of inches between the outer garage skin and inner radiant barrier. The hornets at that point can do whatever they want, provided it doesn't breach the radiant barrier.

Next steps will be to move all tools from the old "garage" to the new one and begin retrieving and inventorying Eleanor's strewn mess of parts back into some semblance of order.