Slow going on the Euro 528 project car...Been doing regular drives and dealing with a little bit of Solex
4A1 carb variable behavior. Latest issue is unreliable starting and troubleshooting has isolated it back
to the high voltage terminal of the coil and no spark.

I'm clearly dealing with some non-OEM components, including the unbranded, black "6V , no external ballast required" ignition coil. I made the mistake of hooking up a new 12V Bosch coil requiring 0.9 Ohm ballast. I thought I could at least prove out start and then worry about the ballast, but instead I melted insulation off some of the low voltage wires going to the distributor and coil and am cleaning up that mess.

I've got a lot of BMW manuals, but none directly address the Euro 528. I apparently need to add a ballast resistor, although that's not OEM either. All my manuals suggest the 0.9 Ohm transparent wire is part of the original harness - not a discrete resistor, but likely just a stretch of wire with 0.9 Ohm resistance (transparent wire described in manual).


P.S. I've been strangely finding more information on Mercedes forums relevant to this car. Our board here is U.S-centered, so very little carb information. Mercedes seemed to be the biggest application of the Solex 4A1. Searching Bosch/Beru ballast resistors directly also reveals mainly Mercedes applications popping up.
Robert
77 530i
77 Euro 528
Top

You are certainly correct about this site not covering much about euro-spec E12's. However, I would suggest that perhaps your reverse voltage may be a culprit. As our systems are DC, polarity certainly matters.

You mentioned that some of the low-voltage wires going to distributor and coil were heated to the point of melting insulation - that certainly rings of reverse polarity OR the fact that you went from a 6v ignition coil to a 12v coil. Is the Euro-spec E12 a 6v system?

So, with ZERO knowledge of your Euro-spec E12, I would suggest confirming whether or not the distributor/coil setup is 6 or 12 volts. I would also do a simple polarity/continuity check via multimeter, using the manual's blueprints as a guide, to determine where voltage is first introduced into the low-voltage wires, and out via exit points.

Lastly, I'm kind of scratching my head as to how your running arrangement was 180 degrees opposite to how the manual references (blk/red on - terminal). Is there some sort of modification that perhaps, changed what wires go where?

Thanks for bouncing some ideas. It's definitely a 12V system, but I agree that the polarity issue
is probably the most likely cause of my melted wires. In ordering that new 12V coil, I had checked that the Euro 528 coil and U.S. 530i coil are the same part number and I further confirmed that with Saul at Maximillian in ordering more ignition parts today. I'm fairly certain the ignition is similar with these two cars by schematics and will rebuild the system accordingly. My best guess at this point is that the old 6V coil is not sensitive to polarity and a very simple transformer wouldn't be. Thankfully, wiring looks pretty OEM under the electrical tape mess once I get away from the coil and distributor. Good opportunity to clean all the wiring up and package it in a split loom instead of the current tape sticky mess. Have to wait for my parts from Germany now...
Robert
77 530i
77 Euro 528
Top

So I decided to look at some internal ignition coil views and came across a combined coil/distributor diagram that I believe demonstrates how critical it is to ensure proper polarity is achieved. 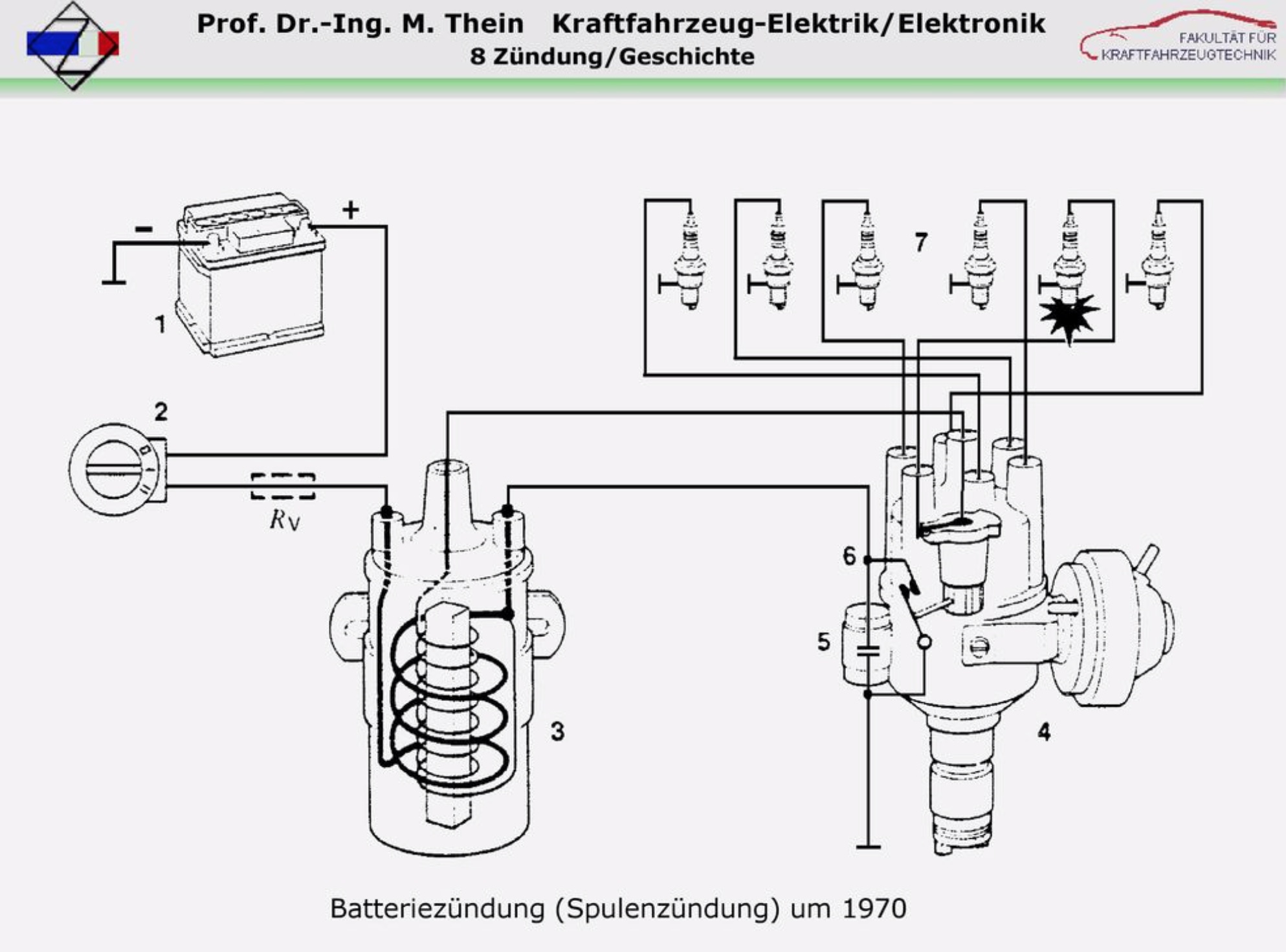 Now that I've researched this, it will certainly help me in my project. Maybe it will help you as well?

I'm not entirely convinced, because, the resistances here are illustrated in series. It should not matter for the primary circuit, therefore, about polarity. It's an on-off DC circuit with resistances in series. The resistance through the coil itself should be nearly identical between a no-internal-ballast 12V coil and 6V coil. What I'm finding difficult to reconcile is Robert's description of the ballast resistor wired in parallel with the blk/rd wire, which would divide current but leave voltage at 12V. That doesn't seem right.

I think there's something more to this than just polarity. You say "conventional ignition," and I assume you've rechecked if the points stuck closed? Also, an overcurrent situation can melt the condenser plates, which may have occurred by running the 12V coil without the ballast resistor. this can result in a short. That in turn can burn the points or melt wires.

It's just that melted wires to me say "short," and the windings of a (good) coil are a straight electrical path.

If your old coil was hooked up backwards, then the secondary high-voltage polarity would also be reversed, causing the spark plug to fire away from the center electrode and onto the prong. That should have resulted in some ugly (e.g. eroded) prongs over time.
(oo=00=oo) Eric
1981 528i Manual
Top

Eric - Parallel might not be the best word, but BMW schematics differ from that which Mike shared in the ballast resistor being connected between the low voltage terminal for the blk/red wire and presumably a grounding node (large solid circle). It also doesn't really seem to be a serious heat dissipation resistor either, but instead a stretch of 0.9 Ohm wire likely embedded into the OEM harness. Points were definitely not stuck closed before the melt down event; in fact, I had just installed new points and gapped them. I've got multiple new points and condensers on order.

The polarity will have nothing to do with the primary current, the AC and DC resistance is the same regardless of which terminal is positive and which is negative. Improper polarity will affect the secondary and the ability to generate a hot spark.

The wire used as a ballast resistor is NiChrome, and is rated in ohms/foot. If it's about equal to the primary resistance of the coil it will reduce the current to about half and save the points.

You can test the effect of the ballast resistor by measuring the voltage at the positive terminal when the points are closed or shorted out.
'72 3.5L 5-spd Bavarious - E3 with E12 front struts/brakes, E28 3.25 LSD rear axle, E39 wheels, Webers, etc, etc, etc...
Top

The old running configuration also had a large capacitor hanging off the coil positive terminal and going to body ground. It's hard to say if that was essential or for something more trivial like reducing radio interference.

Anyway, I'm essentially restoring the low voltage wiring for the ignition coil like the U.S. 530i and using a discrete 0.9 Ohm resistor. My Euro parts are to arrive tomorrow so this can move forward.
Robert
77 530i
77 Euro 528
Top

After melting a second set of points, I stepped back and did some more research. A post from a few years back from Mike W. led me to look at the starter more closely as the wiring problem. One issue is having a polarity problem at the starter as apparently there are different terminal configurations on them. Second, is the starter itself. My fairly new looking rebuilt starter is a Bosch SR441X. Further reading reveals this is not a stock starter replacement, but considered by many to be an upgrade for use on the M30 engine. This E9 thread was a critical find:

Wow. Looks like others also discovered the hard way that continuing to connect the "always hot" starter terminal to your coil is going to melt a few items in your ignition circuit. In my case on the Euro 528, this means don't connect the blk/red wire. This might have been partly my doing as I was trying to find a home for the disconnected blk/red wire at the starter after working on the P/S hoses; I thought I had inadvertently knocked it off while working. I guess that wire was intentionally hanging and connecting it to ultimately an unused ground terminal, rather than positive, on the starter was the issue. REcall the other end of the blk/red wire was originally connected to the coil (-) terminal.

I now have spark from the coil and also verified at a plug and nothing melted. I'd like to see it start, but got to get my restored exhaust system back on first.
Robert
77 530i
77 Euro 528
Top

Wow. This is the stuff nightmares are made of. Kudos for your sleuthwork.

On all but the most routine maintenance tasks, I've taken to photographing everything before I touch it, and religiously consulting the pix when putting things back together. That would not have helped me here.
(oo=00=oo) Eric
1981 528i Manual
Top

Went through the same thing when I "upgraded" the starter on my 77 530i last year. Hooked everything back up exactly the same and promptly melted a wire. Did a bunch or research, repaired the melted wire, disconnected the red/black wire and everything's been fine since.

OK. Good to know somebody else experienced the same with the starter (not that it was pleasant).

Following up on this, I ended up restoring the ignition system on the Euro 528 basically as it
would be on a U.S. 530i with two exceptions:

1. Left the red/black wire disconnected since I have the Bosch SR441X starter
2. Since I found no 0.9 Ohm resistance in the wiring from electrical measurements, I used a
Beru discrete 0.9 Ohm ballast resistor as suggested by the sticker on the Bosch coil. The BMW part numbers do actually map the Euro 528 to the same ignition coil as the US 530i. That Beru resistor seems to be a stock item for Mercedes cars from the 70s.